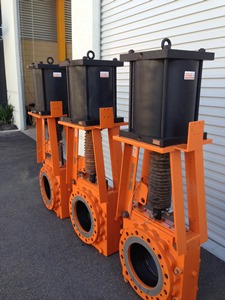 “We were advised that their 21 Bar rated OEM knife gate valves were consistently failing after only four weeks in operation in the worst reported applications. A decision was taken by the refinery team to extensively trial a number of their knife gate valves retro-fitted with DUAL’s  sleeves after we confirmed their suitability and dimensional fit” explained Justin Mirto of Dual Valves Australasia (DVA).

“An initial set of four valves was retro-fitted with DUAL sleeves, and these were installed in selected worst performing areas where the OEM sleeves were consistently failing after only four weeks in operation.  At the time of writing this article, reports from the end user indicate the trial valves had been performing well for over 12 months.”

Encouraged by performance of the sleeves, the refinery embarked on a program to refurbish all the OEM valves with DUAL  sleeves as and when they fail – in an ongoing exercise that has resulted in the refinery enjoying a new-found luxury: a reliable stock of rebuilt valves sitting in their stores awaiting deployment – something that they had not achieved in years with the OEM.

“All the clichés apply – ownership costs are down, downtime has been slashed – and maintenance crew morale is up. It’s been extremely satisfying to see these results unfold and recognised by end-users. DUAL’s long standing philosophy of offering customers high performance with excellent value have certainly paid off for this client” explained Justin Mirto. “We expect to see more end-users challenge the reliability and performance of their existing OEM push-through style high pressure knife gate valves as more reports like this gradually filter through the industry”