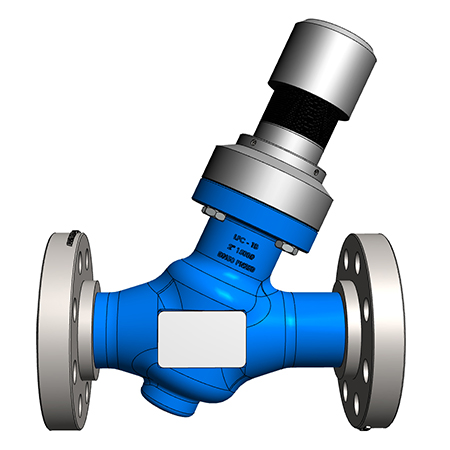 A surge relief valve is designed to open when a over pressure situation occurs and thereby prevent excessively high pressures from putting people and equipment at risk.
The LFC™ 2A spring acting surge relief valve has been developed to present a robust and simple solution to fluid handling issues in the mining sector.

The LFC™_1B spring acting surge relief valve is designed to minimize wearing parts and in effect only has one moving part called the plug assembly. The plug assembly is a piston that is engineered to be unbalanced. The unbalanced plug assembly together with a spring are designed to use inline fluid pressure to create specific conditions in the system without the use of an external controller or pilot.

A fixed opening force can be established by fixing the surface area ratio exposed to the upstream pressure and the spring combined. Upstream pressure (Pu) would act to open the valve. As the Pu increases, the opening force increases proportionally causing the spring to compress and the valve to open. If Pu is reduced, the valve will close proportionally in an effort to maintain its hydraulic ratio and spring force combined.

The LFC™_1B spring acting surge relief valve relief pressure, can be adjusted within the spring range.